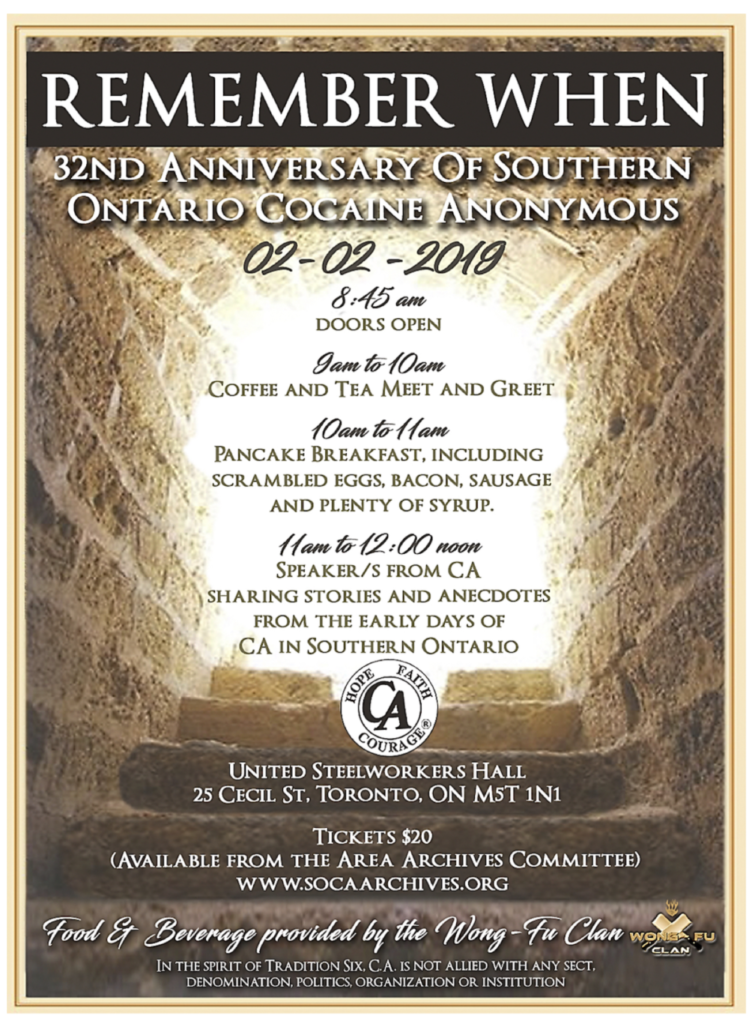 Download the history of CA in Southern Ontario in PDF

Listen to the early history of CA in Southern Ontario

Tom K., the owner of an “entertainment industry sober living facility” called ” Studio 12″ identifies the need for a group for cocaine-addicted people to talk about their struggles and sobriety.

Tom K. plans to host an AA Meeting for addicts, specifically cocaine addicts, at the Motion Picture Fund in Hollywood, California “because if you go to AA meetings and talked about drugs, they asked you to leave.”

Tom K., an A.A. member, is a “strong help” to the budding C.A. group. He helps find rooms for meetings, set up work committees and shows them how to do a directory and get things organized. As a result, Cocaine Anonymous quickly expands across the United States.

Within three months Montreal had six C.A. meetings going and in a very short time the first French speaking C.A. started and then a bilingual meeting, “Saturday Night Live” emerged with over 200 people in attendance.

Colette B.R. was in treatment for cocaine addiction in the mid 1980’s and started going to A.A. meetings, where they did not like hearing about anything other than alcohol. Colette felt that cocaine addicts behaved beyond the scope of alcoholism and needed a place to talk to other cocaine addicts.

In the winter of 1986, Colette went to Montréal where she attended a C.A. meeting, which had only been in existence a few months. At this meeting Colette met Robert F., and many other people who shared similar experiences with alcohol and drugs as Colette had. “Oh my God I’ve got to bring this back to Toronto. So Colette received a “Starter’s Kit” from Robert F. and on February 2, 1987, the First Toronto Group of Cocaine Anonymous had its inception meeting at the St. Andrews United Church on Bloor St. West, where it is still taking place today.

The fellowship continued to grow and a second meeting started in September of 1989 – The Phoenix Group. On Friday’s in 1989 the Deer Park Group was started by Charlie L. Then in May (5), 1990 the Winner’s Circle started followed by the Freedom Group on May 31, 1990. By September (11) of 1990, Naturally High Park started with Tuesday and Friday evening meetings.

Today, 32 years later, Cocaine Anonymous in Southern Ontario numbers some 70 regular weekly Group meeting and has a presence in more than 20 hospitals and institutions across Ontario. Our meetings range from Windsor, Ontario to as far north as Ottawa, Collingwood, Orillia, and throughout the Greater Toronto Area.