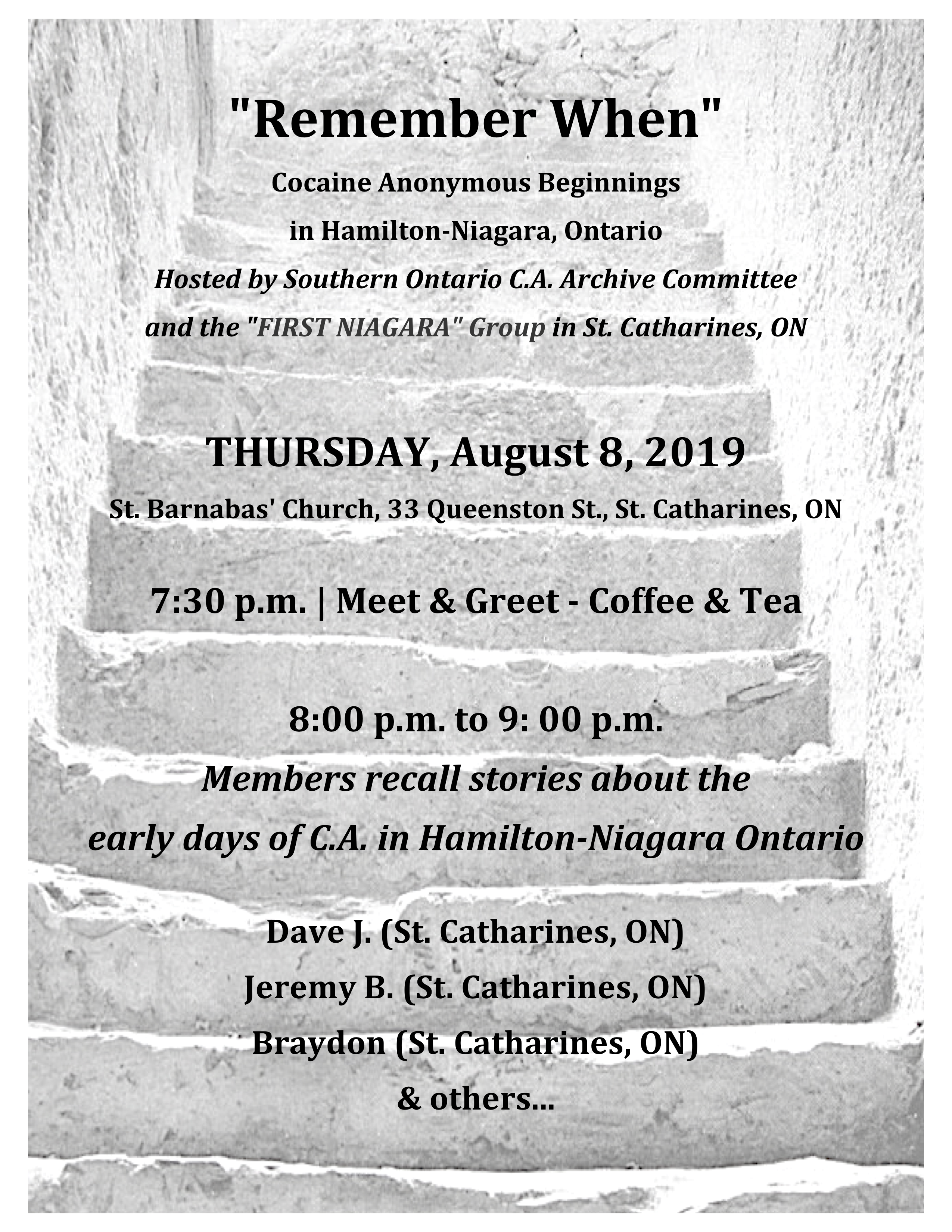 Listen to the History of First Niagara Group of C.A.

A Brief Historical Timeline of the Hamilton-Niagara Cocaine Anonymous

1st Meeting of Cocaine Anonymous outside the United States

The original inception members of the First Toronto Chapter were Colette B.R., John J., and Joey B. (aka Popeye). They were soon followed by: John A., Chrissy Y., Abe S., Victor B.M., and Bill S. Many early C.A. members came from the A.A. Delisle Group at Yonge St. & St. Clair. The meeting later changed its name to the First Toronto Group.

Donna F. and Doug C. come into recovery in 1998 and start a C.A. meeting in Hamilton at the St. Giles United Church (85 Holton Ave S, Hamilton, ON) for our Thursday night meeting. Our first meeting was March 2, 2000 with about fifty in attendance—what a “RUSH” when I said welcome to the First Hamilton group of Cocaine Anonymous. Hamilton soon grew with Sunday night opening. Then Tuesday, Wednesday, Friday, Saturday and finally Monday. A Cocaine Anonymous meeting in Hamilton everyday of the week in under two years. The Hamilton fellowship had Christmas dinners for ten straight years open to all. These grew into just over two hundred addicts and families attending. There was a one-day Fifth year anniversary. It consisted of five workshops followed by a lasagna dinner and dance. Attended by almost two hundred addicts. At the tenth anniversary Hamilton had two hundred and fifty addicts for a one-day event of five speakers and our keynote speaker was Mickie B. from California. Towards the end of a 14-year run, the 1st Hamilton Group, due to declining membership, closed it doors in December 2014.

CA in Niagara started due to the fact that some recovering addicts in Niagara were required to drive to Hamilton to attend a meeting of Cocaine Anonymous. Why not start our own meeting right here in St Catharines?? ( Jimmy J., Andrew G., Mike G., Lisa P. and others… ) It was the beginning of CA in the Niagara Region.

The 1st Niagara Group was formed and it’s believed the first meeting was March 28th 2002. Followed close after on August 26, 2002 with the Courage to Change Group. A Group member list from September 2002 of the 1st Niagara Group had 42 listed members. It took several more years for CA to start to grow again. Meetings opened and closed in both Niagara Falls and Welland as some tried to expand the fellowship. At our peak we had 6 meetings a week, and we started to hold one day Round-ups from 2009 to 2013 in Niagara.

Instead of 6 GSR’s going to Toronto to attend the CA Area Meeting, districting of the Niagara groups was proposed rather than the earlier controversy of Area, districting us!!! The Niagara District was formed and ran from August 26th 2012 to April 12th 2014 until it dissolved due to a smaller number of groups.

From a start in 2002 through to present there has been 15 different groups in the Niagara Region, we currently have 4 meetings open and have started having one day Round-ups again, alternating between Hamilton and St. Catharines hosting them. The next Round-up is in St. Catharines on November 16th.

Every year Southern Ontario Area hosts a three-day Convention in Toronto with more than 400 in attendance annually.

Lastly, every second Saturday of the month there is an Area Service Committee meeting whereby elected Trusted Servants and Group GSRs meet to do the work of C.A. in Southern Ontario. 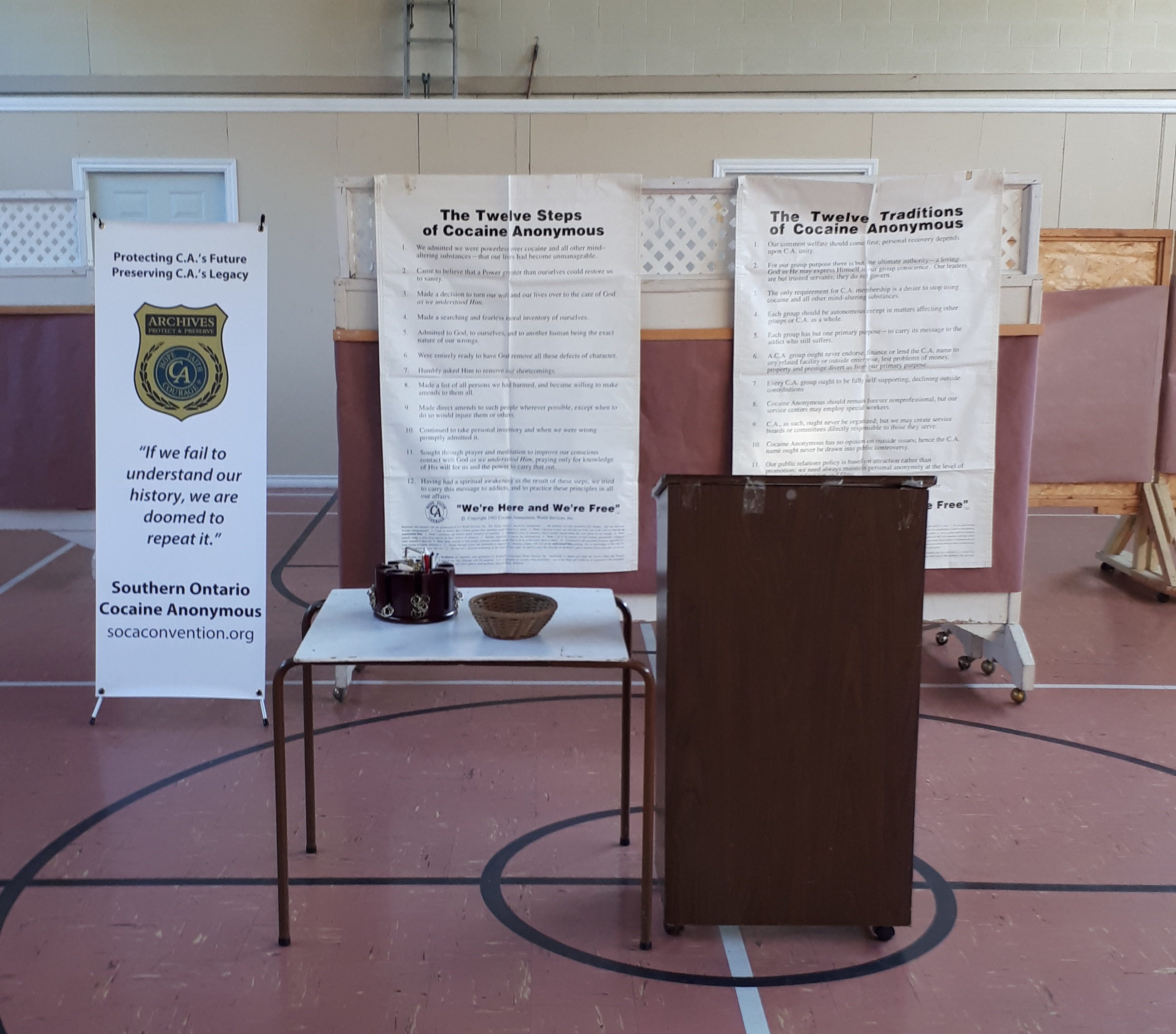