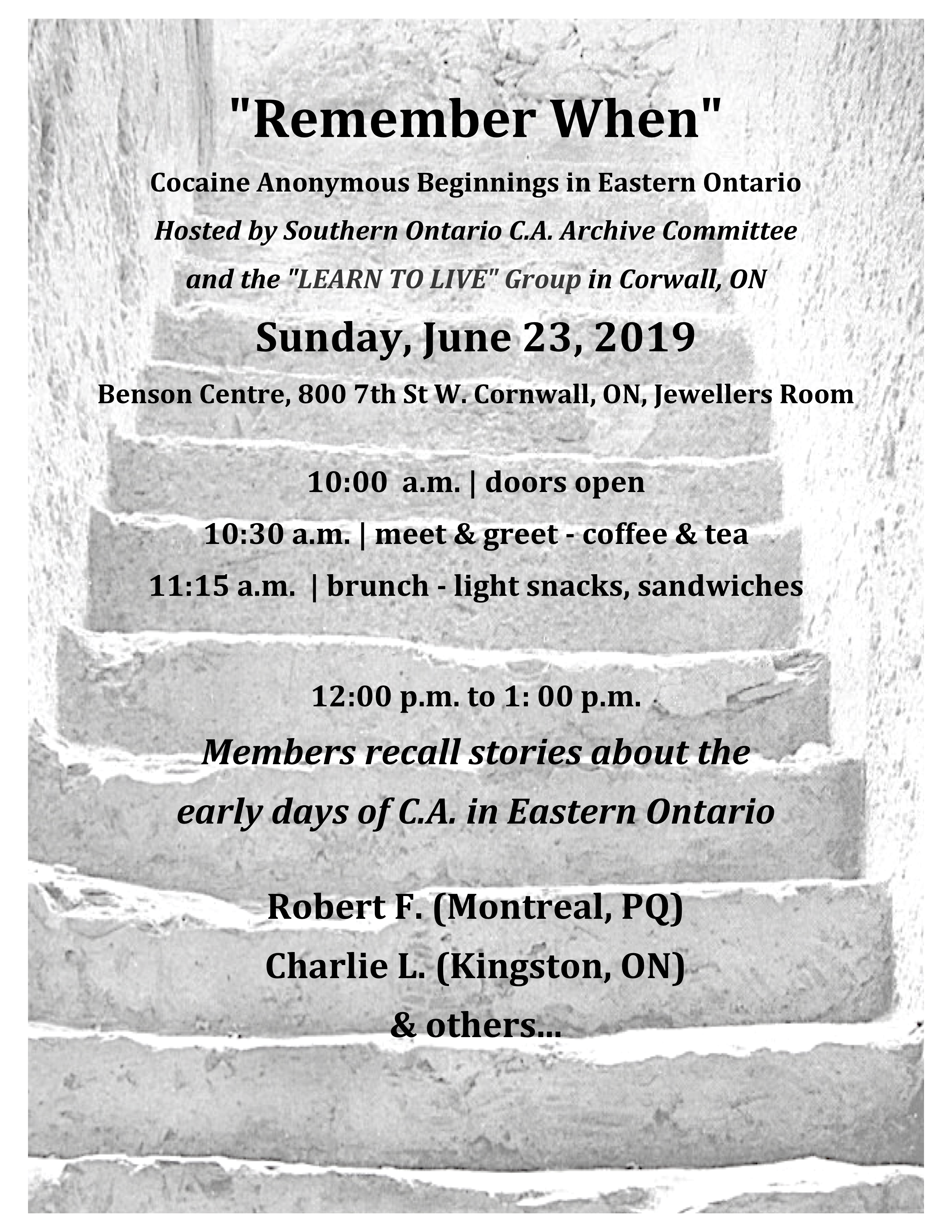 The original inception members of the First Toronto Group were Colette B.R., John J., and Joey B. (aka Popeye). They were soon followed by: John A., Chrissy Y., Abe S., Victor B.M., and Bill S. Many early C.A. members came from the A.A. Delisle Group at Yonge St. & St. Clair.

By February 1987, the C.A. fellowship in Montreal, Quebec had 11 meetings with interest in getting C.A. established in Ottawa (Ottawa was then a part of the Quebec Area). So in March 1987, Greg, a former cocaine addict with 90 days sobriety, started a C.A. Group in Ottawa. The Group met Thursdays at 8 p.m. at the McNabb Community Centre on Percy St. and attracted between 12 and 15 addicts. By March of 1989, Cocaine Anonymous in Ottawa had a 24-hour hotline and meetings every night of the week at the McNabb Community Centre (Percy Ave.), Jack Purcell Community Centre (Elgin St.), All Saints Anglican Church (Richmond St.), and St. Luke’s Church (Somerset St.). Early members included: Greg, Stephen B., Dougie D., Frank, Cheryle B., Kevin O., Lisa, Scotty Joey J., Steve S., Marc B., John K. and Luc R. Meetings in Ottawa continued until they disappeared sometime in 1998.

Then on July 17, 2011, Suzie A. starts a new C.A. meeting, “No Choice” in Ottawa on Sunday Afternoons. Members such as, Matt H., and David K. help keep the Ottawa fellowship alive. In July 2017, Ottawa became part of the Southern Ontario C.A. Area. Meetings in Ottawa continue to this day.

Friday nights, the “Spiritual Progress” Group shows up in Cornwall, Ontario and lasts until February 2015 when it finally disappears. On March 1st, 2018, John G. starts the “Learn to Live” Group in Cornwall, which continues to this day.